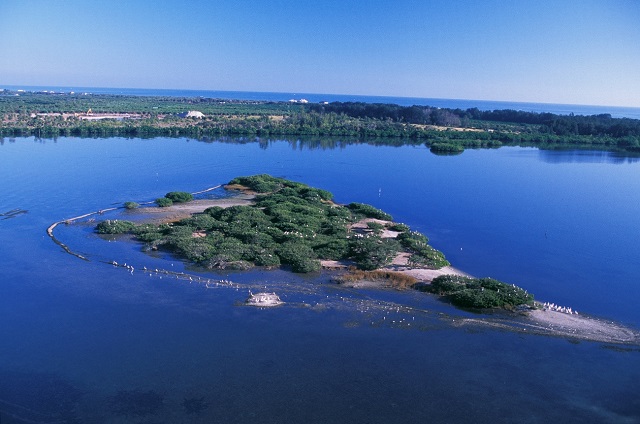 Designated as a bird sanctuary by President Roosevelt in March 1903, Pelican Island became the first National Wildlife Refuge in the United States. The refuge is located within the Indian River Lagoon, the most biologically diverse estuary in the United States. The refuge is famous for its Brown Pelican rookery, but 15 additional species also nest on the 4.2-acre Pelican Island, including Wood Stork, Anhinga, American Oystercatcher, and many herons and egrets. At least 15 other bird species use the island to feed and rest. Although the island itself is off limits to visitors, it is viewable from a boat (keep outside the closed area) or from a distance from land. Take Jungle Trail road to the 3/4-mile interpretive, and wheelchair-accessible Centennial Trail (which opened on the refuge’s 100th anniversary) to an elevated observation tower with two fixed viewing scopes, one of which is wheelchair-accessible. Two additional foot trails around impoundments and mangroves give additional birding options, including a new observation deck over the mudflats on the Joe Michael Memorial Trail. Bathrooms and more kiosks are also available at the Pelican Island Orientation Area, located near the intersection of A1A and Jungle Trail.  Roseate Spoonbill and Magnificent Frigatebird are summer visitors, and American White Pelicans overwinter here. Also be on the lookout for the over 30 butterfly species that have been recorded including Giant Swallowtail, Cassius Blue, Mangrove Buckeye, Mangrove Skipper and Painted Lady. The large and spectacular Malachite, normally found much further south, has turned up here in January.