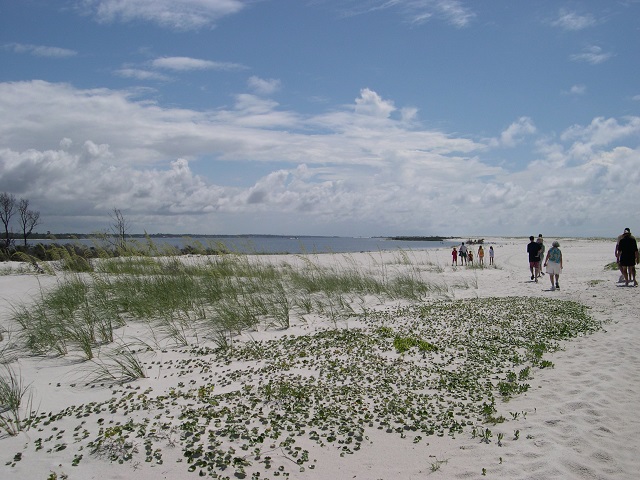 This property encompasses the eastern tip of Perdido Key at the mouth of Pensacola Bay, with miles of undeveloped beach. To begin, turn left (north) 0.25 mile past the fee booth and park at the end of the road. A 0.5-mile loop with a boardwalk nature trail begins here, which can be good in spring for songbird migrants such as Swainson’s Thrushes. Pine Warblers and Eastern Towhees call from the pinewoods while the boardwalk winds through marsh good for Clapper Rails and Spotted Sandpipers at muddy edges. Return to the main park road, which runs eastward for another 2 miles. Beach (south side) and lagoon (north side) accesses along the road allow looks at Northern Gannets October through March, and a diversity of gulls, terns and various shorebirds year-round. Least Terns and Snowy Plovers nest in the protected areas on the north side of the road and elsewhere, so be careful not to disturb them. Small coves on Big Lagoon shelter ducks and Common Loons from the winter wind, offering good, close views. Extended hours are available (ask about Night Owl permits), and primitive camping is allowed (with permit) on the east end of the key.