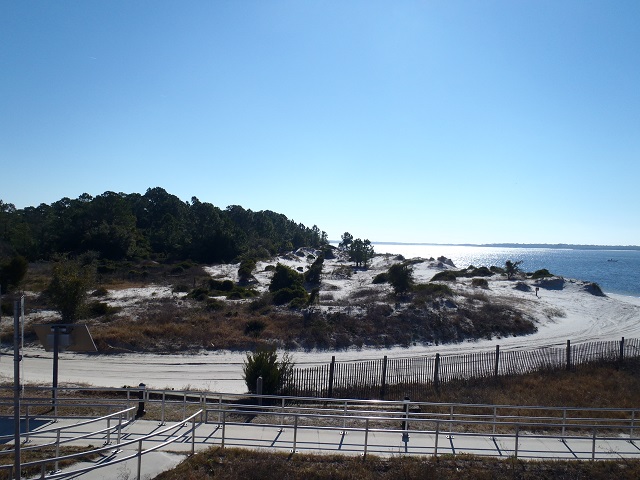 Located on the southernmost tip of Amelia Island, this site can be great for shorebirds on the beach during low tide (the point where Nassau Sound meets the Atlantic is especially good at times). The park has 2 miles of beach, plus coastal strand, salt marsh and maritime hammock habitats. Additionally, it offers an access to the catwalk on the bridge over Nassau Sound and to the pier at George Crady Bridge Fishing Pier State Park (restrooms are provided here; the pier also has pedestrian access to Big Talbot Island State Park). From the catwalk and pier, you can get good looks at the sand bars and bird islands in the sound – at low tide expect Brown Pelicans, American Oystercatchers, Ruddy Turnstones and Willets to be loafing or feeding there. From this point, you can see the birds flying to their roosts at sunset. Both Nelson’s and Saltmarsh Sparrows skulk along the edge of the saltmarsh in winter and Clapper Rails are resident. Rarities such as Common Eider, Red-throated Loon, Franklin’s Gull, and Iceland Gull have been recorded Guided equestrian tours on the beachfront are available through a private concessionaire.  Amelia Island Critical Wildlife Area was established in 1981 to protect beach-nesting birds.  Portions of the beach are posted closed during the breeding season (March-August) for the protection of nesting birds, such as Least Terns and Wilson’s Plovers. Click here for more information on this Critical Wildlife Area.