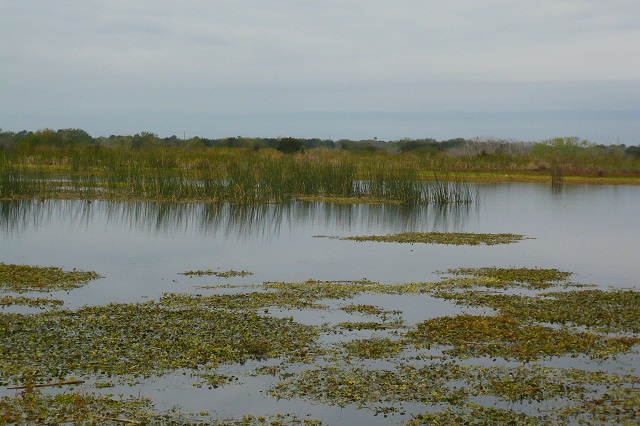 This created wetland not only treats reclaimed water for Titusville, but is also home to an amazing diversity of birds. One of the first facilities of its kind in the U.S., it uses aquatic plants to absorb nutrients such as phosphates and nitrates in the highly-treated effluent water. This process helps prevent river-choking algal blooms in the stream into which the water is eventually discharged. Upon arrival and when leaving be sure to sign in and out of the facility at the office. Great and Little Blue Herons are common here year-round, as are Purple Gallinules, American Bitterns (winter) and Least Bitterns. Blue-winged Teal are present in small flocks from late October through February; a male Cinnamon Teal (rare) was recorded in February 2016 so check the blue wing flocks carefully. Northern Harriers and the occasional Crested Caracara patrol the site in search of a meal. Anhingas nest at the southern end in cells 5, 6 and 7. The dike roads are open to vehicles but are exposed to full sun, so bring sunscreen and beware of summer lightning storms. The Space Coast Birding and Wildlife Festival offers field trips here each January.