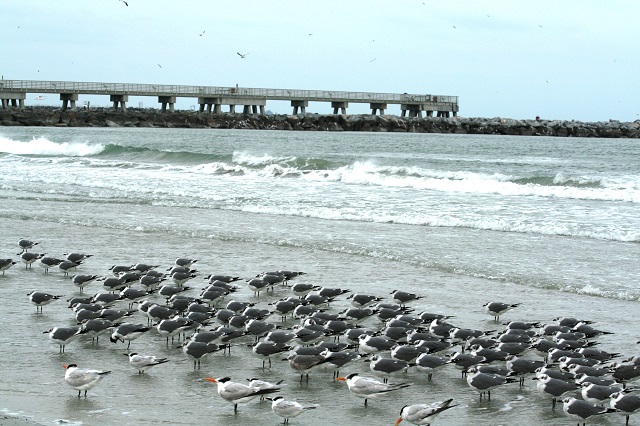 This park’s jetty is the last land ships pass as they leave Port Canaveral, headed out to sea. At the north end of the park, check the ship turning basin from the jetty pier. The turning basin provides refuge for the occasional Common Eider and Surf Scoter in the fall and winter, as well as Common Loons, Double-crested Cormorants and Red-breasted Mergansers. Shorebirds such as Ruddy Turnstones and Willets are common, and Purple Sandpipers are recorded in the winter. Large flocks of Royal, Sandwich and Forster’s Terns, and Black Skimmers loaf on the beach and Reddish Egret, Roseate Spoonbill, American Avocet and Lesser Black-backed Gull are noted regularly. The site is renowned for attracting rarities; Iceland, Sabine’s and Franklin’s Gull have all been recorded as well as Arctic Tern, and Razorbill. Check the channel markers for roosting Brown Booby. Scope offshore for seabirds such as Northern Gannet and watch for Parasitic and Pomarine Jaegers chasing gulls and terns. A small hammock on site can be good for songbirds during migration. While walking along the fishing pier look for young sea turtles feeding close to the pilings and dolphins are often spotted close to shore. The park can be crowded on weekends so visit early or on a weekday.