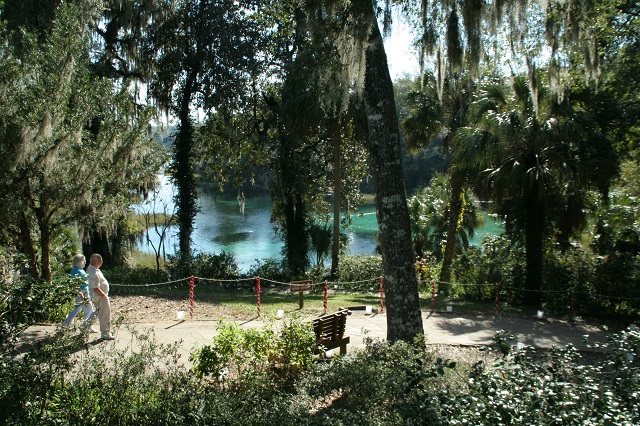 Famous for its first magnitude springs (fourth largest in Florida) and former site of a private theme park, this site reopened to the public in 1995. Start by picking up a trail map at the visitor center. A series of paved and brick walkways around and above the scenic head springs can yield resident and migratory songbirds, such as Red-eyed Vireo and Northern Parula. Great Egret, Green Heron, Anhinga and Pied-billed Grebe can be seen from the river overlooks. Follow the path east beyond the waterfall area to an extensive, native plant and butterfly garden. Ruby-throated Hummingbirds can be found along with over 40 species of butterfly including Red-spotted Purple, Whirlabout, Sleepy Orange and Cassius Blue. Southeast of the garden is the trailhead, where three hiking trail loops lead to the quieter side of the park. Two miles of trails wind around old pasture (sparrows, American Kestrel) and through pine flatwoods and sandhills (Red-headed Woodpeckers, Eastern Towhee and Yellow-throated Vireo) and hardwood forest (Barred Owl, Hermit Thrush and Yellow-throated Warbler). This park is also a launching point for paddling the Rainbow River Aquatic Preserve. Canoes and kayaks can be rented within the park. Ranger-led walks and guided paddling trips are offered, call for details.