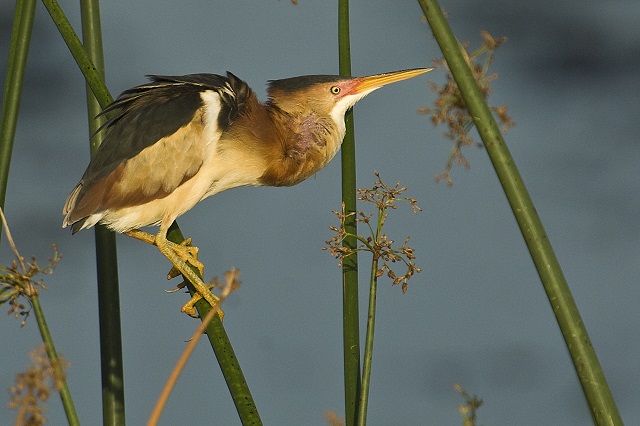 Utility Services department has recently taken over the management of the wetlands, as it is a critical component of the wastewater treatment process. As such, the primary focus for the foreseeable future will be the optimization of the site as a treatment facility rather than a public park. Limited public access is allowed, but amenities and public outreach related to birding and other non-utility activities will be greatly reduced.

The Ritch Grissom Memorial Wetlands a.k.a Viera Wetlands, is a water treatment facility that offers superb birding by foot or bicycle. Crested Caracaras nest at this site; check the sabal palms and pines near the start of the loop drive and along the wetland perimeter. Drive the impoundment roads around the four shallow-water cells (follow the signs and do not block the roadways), scanning for waterbirds like Wood Duck, Least Bittern, King Rail, Limpkin, Glossy Ibis, Roseate Spoonbill, Black-necked Stilt and Purple Gallinule. Shorebird diversity is outstanding – scarce migrants such as American Golden-Plover, Upland Sandpiper and Buff-breasted Sandpiper have been recorded. Two observation towers provide vantage to scan for raptors such as Bald Eagle, Northern Harrier, Cooper’s Hawk and the occasional Snail Kite. Rarities spotted here include Masked Duck and Mangrove Swallow. Butterfly enthusiasts should check the demonstration garden by the gazebo and the shoreline along the central lake. Call ahead to check for possible road closures; the dirt impoundment roads may close following inclement weather.