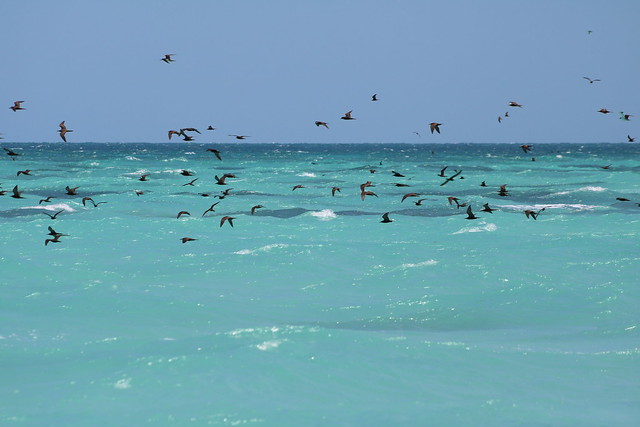 Avid birders know the incredible possibilities that exist on this remote island oasis. The southernmost point in the continental U.S., this park offers the seagoing birder opportunities to view species that occur nowhere else in the country. Bush Key hosts the only significant breeding colony of Sooty Terns in the U.S., and from February through August there are literally tens of thousands of these birds loudly claiming their territories. Intermixed with the “sooties”, Brown Noddies also nest here, and the occasional Black Noddy can be found by carefully picking through the birds perched on the coaling docks. Brown Boobies perch on the pilings with the occasional Roseate Tern, Masked Boobies nest on nearby Hospital Key, and vagrant Red-footed Boobies are seen almost every year. Pelagic species such as Bridled Terns, Audubon’s Shearwaters and Band-rumped Storm Petrels are seen in the channels. Migratory fallouts during late April and early May can be the stuff of legend, with exhausted trans-Gulf migrants settling on the first dry land they have come across in thousands of miles; it is not uncommon to experience 25-warbler mornings after the right weather conditions the night before. Common birds in the Tortugas include Magnificent Frigatebirds, Peregrine Falcons and shorebirds such as Ruddy Turnstones. This is truly a special birding destination. Visit the Dry Tortugas National Park website for details on how to get to this magical destination.